“It’s not the years in your life that count, but the life in your years” (Abraham Lincoln)

Two countries, one man, and memories that were as much about how they were as where they were.

In late 2013, they flew to Turkey. Theirs hadn’t been the endless summer she’d longed for, as they battled with the emotional see-saw of each other’s insecurities, but as they boarded the plane, it finally felt it was their time.

Turunc turned out to be the closest she had ever been to paradise.  A tantalising glimpse of its bay teased them as their taxi wound its way through ancient pine forests. Sparkling blue waters beckoning them down, and took their breath away.  “Is it OK to be deliriously happy?” she’d asked. 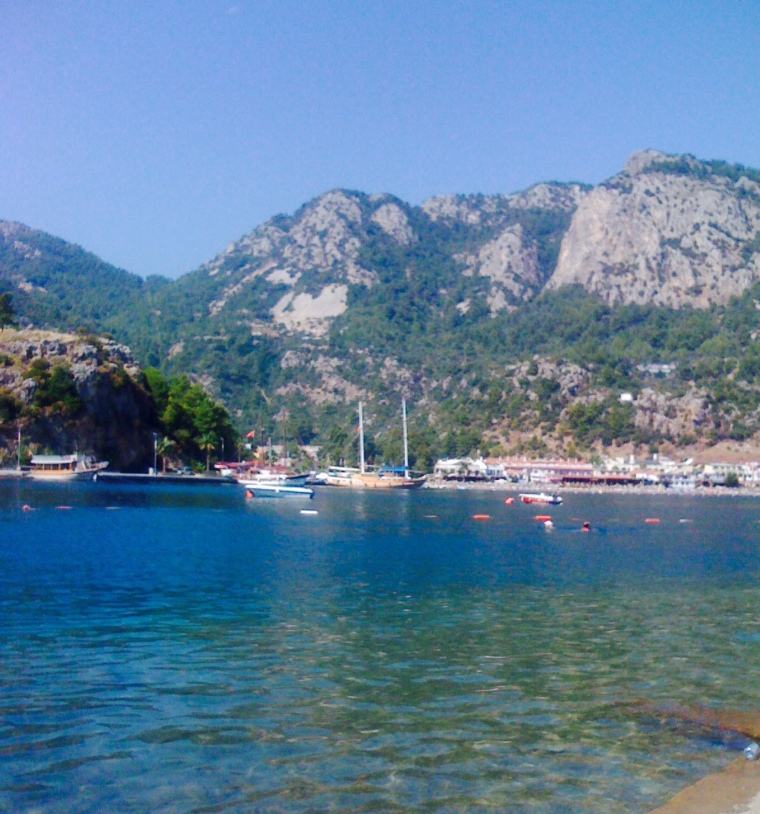 Such precious times …. when contentment was the Aegean sun on her skin, her man by her side, and tucking life-affirming moments into their memory bank.  Never a strong swimmer, riding pillion on his jet ski was both exhilarating and utterly terrifying – eyes squeezed against the sting of salt water, arms gripped around his waist like her life depended on it, yet total trust that he would keep her safe. Getting plastered, literally, in the mud baths, and afterwards winding a path through the Dalyan reed beds, past Lycian tombs cut high into the cliff and out to Iztuzu beach for turtle-spotting … so wonderfully exotic, another world.  Then … there was the mountain trek … in a jeep. No doubt a tried and tested formula, equipping twenty adults with super-soakers guarantees to break down barriers and find their inner child … an action-packed, dust-ridden, water-drenched, laughter-filled, conquer-the-world kind of day. They would later reminisce, it was their best of times.

The following months were happy enough, though while her feelings grew, it never really felt like he was hers. That dull uneasiness when something doesn’t feel right.  And so the day they would leave for Egypt loomed in her diary like their endgame … at least she would have him, until then.

Sharm El Sheikh was like nowhere she’d ever been – a surreal strip of tourism painted on desert flats between the Sinai mountains and the Red Sea, where fifty years ago, there was little more than a Bedouin fishing village. It stays firmly locked inside hotel security gates, cocooning visitors from the real world, and, for them, from their real feelings for each other.

Ignorance, they say, is bliss. Lazy sun-kissed days soothed her troubled heart, and they embraced the opportunity of visiting this extraordinary land. Sharm’s appeal, and where the magic happens, lies of course in it’s breath-taking coral reef. With his encouragement, she’d ventured for the first time into a silent underwater world, and marvelled at darting tropical fish weaving between the corals, sunlight showing off a jewellery box of colours, the likes of which she had never seen.

Not content with staying put, he was determined, despite the dangers of leaving the Sinai peninsula, to visit Cairo. Imagine seeing the Giza Pyramid for the first time as their plane swooped in low to land. The Museum of Antiquities stunned  them with room after room of faded hieroglyphics that spoke in hushed whispers of ancient times … Tutankhamen in his gilded glory and royal mummies lying in silent repose. A trip down the Nile and their first sight of the Sphinx, proud gatekeeper to the pyramids beyond. She’d never imagined in her wildest dreams finding herself there, with him … it would stay with her forever.

Shortly after their return, he told her it was over, and broke her heart. Time heals, of course, and now it is not the pain, but those extraordinary times she remembers when she thinks of him. Right from the start, she’d asked him to help her spread her wings … and that is what he did.